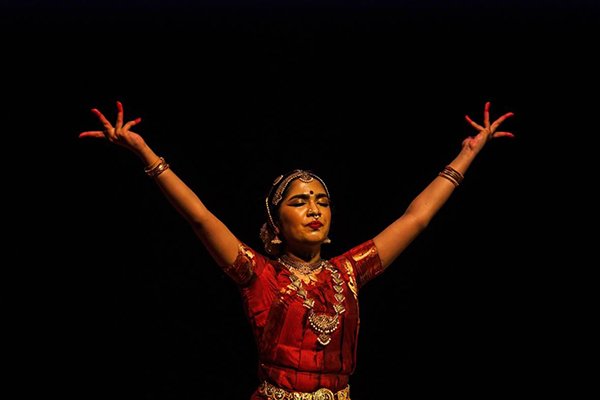 Urmila Vudali, who dances in both the Bharatanatyam and Western contemporary segments of Divine Feminine Shakti Shekinah put on by Sangam Arts, says, “There are so many similarities [between the two forms], just by the way that we communicate rhythm and expression.” (Photo: Courtesy of Swagato Basumallick)

For the last five years, Sangam Arts has brought artists together from wildly different artistic traditions to co-create. “America is not a melting pot but a mosaic,” says co-founder Usha Srinivasan.

“You know, as the Bay Area area gets more diverse, ironically, we are all less integrated because we all tend to live, eat, pray, you know, celebrate within communities that look just like us.” She wants to break down the silos that separate us. “Peel back the superficial differences that we fixate on and we see that there’s a lot more that we have in common, even as, at the same time, we celebrate our differences,” Srinivasan says.

The results can be surprisingly delightful. Watch this performance of an Arabic song, The Flower Seller, sung by by Hannah Doughri with Lee Dynes on the oud and accompanied by Bharatanatyam dancer Urmila Vudali.

Srinivasan says she’s aware cultural fusions don’t always work well. “We don’t want this to be a cultural safari where it’s like international day at school and people are saying ‘Now we have India, and next up, China!'”

She explains, “We’re looking for artists who are also cultural ambassadors, who have a very deep understanding of their own traditions but are also liberal in their outlook towards other cultures.”

Co-founder Priya Das also hopes to foster meaningful artistic collaborations with careful curation. “So I begin with the question of what is it that is common [between cultures]. The David and Goliath story that you tell your child when she or he goes to bed has a twin in Asia, right? The guitar has its origins elsewhere. Why do people get together? To celebrate? A call for the divine?”

Take the upcoming dance concert later this month, focused on the “divine feminine.” Half of the show features the classical South Indian dance form known as Bharatanatyam, courtesy of choreographer and dance teacher Navia Natarajan, who splits her time between Santa Clara and India.

Bharatanatyam has traditionally expressed spiritual themes and it lends itself to modern explorations with ease. Natarajan says the dance Shakti she’s developed for this event considers the way we externalize what we should consider internal energies, whether it’s the divine feminine or personal demons.

The other half of the show comes courtesy of the contemporary, San Mateo-based Newground Theatre Dance. Artistic director Coleen Lorenz created a 40-minute dance story called Shekinah that considers the way “the system” can throw us off balance.  “It can fragment us, and it can move us into episodic moments of rage and misunderstanding.” The main character in the dance moves through that experience to rediscover “the unifying force that’s within each of us.”

“Our world gets so compartmentalized and that divine feminine essence is really about seeing underneath that, and what brings us together,” Lorenz adds.

Natarajan adds, “What I’ve absorbed from Coleen’s work is that the body conveys so much. When you start working with other art forms, you get influenced by the way they perform it, the way they think.“

Srinivasan and Das hope that proves true for the audience, too.