For Black American communities across America, Juneteenth is synonymous with liberation. This month, we’re spotlighting two works in progress and what it means for all communities in search for freedom and healing. 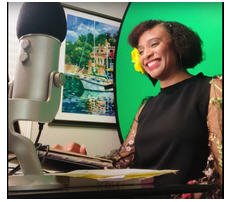 R/evolutionary Healing, sponsored by Mosaic, is an exploration in spoken word, dance, song, and courageous conversations about social progress with Bay Area activists and artists. It’s also about response to the current Black Lives Matter movement. The project explores the universal  healing process in three acts. It is a collaborative piece produced by author, actress, poet and visionary, Venus Jones.

Venus works with other Bay Area artists of varied disciplines including those at the intersection of other untold histories. She considers shared connections, as in the case of working with poet and activist Jordan Wilson. While Venus and Jordan come from different cultural backgrounds, they initially connected over their willingness to speak about the experience of being women who dare to discuss misogyny in America. It is important to Venus that she makes and holds space for others, so no one is afraid to confront controversial topics. She credits Jordan for introducing her to the third spoken word artist in this production, prized poet and educator Jamey Wiliams. Venus is an empathic person who doesn’t want us to forget what caused injustice or the pain of oppression, but she also wants people to look for the “common humanity” and wants us to “imagine a future where we are all thriving, so we can get busy building it ..” Venus also works with educator and vocalist Sherinda Bryant, violinist Simmy Willeman, and Khalilah Ramirez, who is known for her activism in the South Bay as the Peace Dancer. While their work is different in discipline, Khalilah comes to the forefront as someone who represents joy. When Venus thinks about liberation for all of humanity, “I think of evolution, I think of joy, and I think of true healing.”

Virtual performances and using online platforms as a stage presented Venus with some challenges, but it also allowed the artist to welcome dialogue from others as participants. In a recent online event with a Google audience, Venus said, “I love that I had an opportunity to hear what they were thinking, and they had an opportunity to ask me questions. And being in conversation about what landed and why is sometimes my favorite part.” In most of her videos, you can see Venus looking directly at the camera. She has a calm, natural vibe. As a viewer, this effect is absorbing. Her background in film and television work may explain this response. As the host of her YouTube show Soulful Journey, she explains, ”When staring in the camera, you can’t always see, or hear the applause but using the chat box, hearts, and the thumbs up” reactions help with audience engagement. Venus also keeps up the energy with her vibrant voice and by shaking her colorful maracas on screen. She’s very proud of the fact that this project was produced during the pandemic because it’s proof that we all can keep our inner light on or turn it back on and endure. 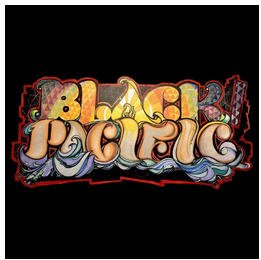 Asked whether historical context is prevalent in all his artwork, Carter says, “As a Black person in America you are literally wearing the past on your person at every waking moment. And so, as I and all Black people are forced to consider issues of race, those things tend to come up in my music because I think that’s a place where I can both express and process what I’m thinking and feeling.”

In coming up with projects in the lens of a Mosaic collaboration, PC shares that the project had first started with the idea of a live performance around the Black/Pacific theme, with featured guest spots from other artists. Once the pandemic hit, they began working with Christopher “Paper Son” Woon-Chen, evolving the project into something more visual. As they set forth, PC shared that, “Unprecedented things in the world began to unfold and this would inevitably influence and shape and inform our conversations over time.” As the pandemic started to wane, they pivoted back to the original idea of Black/Pacific as a live performance. The duo described different ways they have been able to rehearse and refine their processes while working long distance, both technological and in-person: sharing docs and audio, meeting at different locations, on Zoom, and planning for future in-person meetings as well.

As busy working family men, PC and Demone also make sure to dedicate time and space to their collaborations. They commit to stay in conversation during this isolated time, and it helps that Black/Pacific keeps them moving forward in ways they haven’t before. In regards to being strong collaborators, PC says it is important be discerning about who you work with. “If I have a project with Demone, I know I am going to stay inspired. He’s going to say things that make me look at something a little differently than I would.” He looks forward to working with Demone on their projects and says, “if you have that openness and that collaborative working relationship, you want to hear what that other person says, that makes it something that you can stay excited about and keep [up] your momentum.”

Aside from these Mosaic initiatives, Venus, Demone, and PC all have their own separate, independent foundations, having defined their creative voices over years of practice. While they have been able to work collaboratively with others before the pandemic, this past year has compelled them to find new ways to express themselves, without the benefit of a live audience around them. As artists who share universal truths in their works, these directions are shaping their projects into experiences that audiences of different backgrounds will be able to relate to.