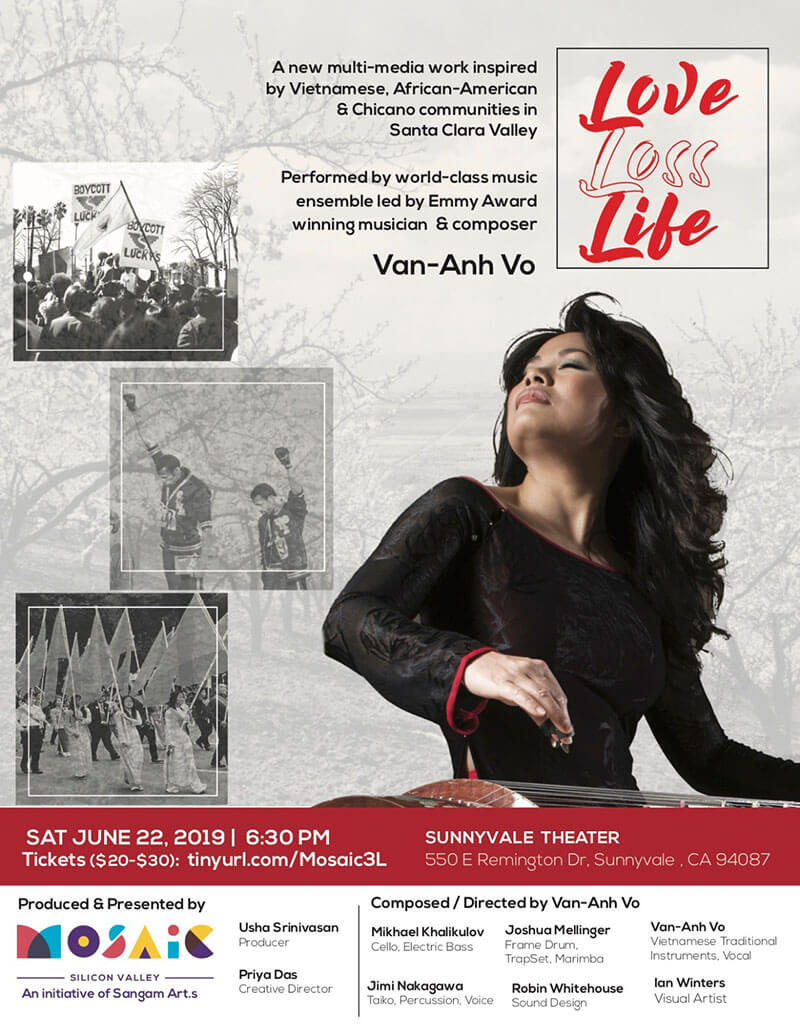 Experience our changing community and our connections to each other through the vision and artistry of Emmy Award-winning musician and vocalist Van-Anh Vo in her new work, Love, Life, Loss.

This extraordinary performance which reflects the transformation of cultural boundaries that comes from cross-cultural understanding and shared experience premiers Saturday, June 22nd at 6:30 pm in the Sunnyvale Theatre.

Love, Loss, Life – A Multimedia & Music Performance is about the shared struggles, joys, and triumphs of the people of the Valley of the Heart’s Delights presented as a rich tapestry of music, video, and spoken word based on Vo’s extensive research into Vietnamese American history, and interviews with elders and historians from the Vietnamese, African-American and Chicano communities.

Van-Anh Vo devotes her life-long passion and mastery of the dan tranh zither to the creation of distinctive music blended with a cultural essence that can only come from this unique Vietnamese instrument. Among her accomplishments are the 2009 Emmy® Award-winning soundtrack for the documentary “Bolinao 52”, which she co-composed and recorded, and the soundtrack for the Sundance best documentary and 2003 Academy Awards® nominee “Daughter from Danang”. Van-Anh also co-composed and recorded for the recent documentary “A Village Called Versailles”, winner of the New Orleans Film Festival Audience Award.

In addition to touring internationally, Vân-Ánh has presented her music at Carnegie Hall, Zellerbach Hall, Lincoln Center, Kennedy Center, and as a composer and guest artist for the Kronos Quartet at the Olympic Games 2012 Music Festival. In 2002, Vân-Ánh released her first CD, Twelve Months, Four Seasons; and in 2009, she released She’s Not She with award-winning composer Do Bao. Recently, she released her third CD Three-Mountain Pass with the Kronos Quartet as her guest artist.