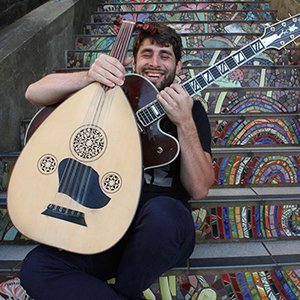 Mosaic Fellow Lee Dynes is a guitarist, oudist, composer and educator living in the San Francisco Bay Area. His style is one that is a product of his many interests and influences with a sophisticated understanding of the mechanics and techniques of the guitar.

For the majority of his career, Dynes has dedicated himself to the study of jazz music and is steeped in the language and traditions of the American artform. As an Ohio native, Dynes possesses a deep knowledge of Bluegrass, Country and Old-Time music that he has played with his father since he was young. Since moving to the Bay Area, Dynes has pursued many musical interests including Indian music on a self-crafted fretless guitar and Arabic, Persian and Turkish music on the oud. Through the immersion and performance of the different traditions and cultures, Dynes’s own compositions are a true mingling of styles spoken through the language of jazz.

Dynes earned his Bachelor’s of Music from Berklee College of Music in Boston where he studied with some of the shining stars of the jazz world including Mick Goodrick, David Gilmore and Hal Crook.

Currently Dynes is involved in a number of projects that reflect his eclectic and varied tastes. He is the founder and guitarist of the self-titled Lee Dynes Trio and released his debut album, “Pathways,” in 2015. Dynes is the lead guitarist in the Amanda Addleman Band and has appeared on the forthcoming album release, “Into the Light.” He plays oud regularly with Arabic music group, Aswat Ensemble, and with artists such as Van Ahn Vo and Nurdan Civi’s Alaturca Connection.

In addition to a busy performance schedule, Dynes maintains a full teaching schedule including private lessons in guitar, mandolin, bass, oud, ukulele and more at the Marin Music Center in Novato. He also gives Skype lessons to students all over the world in jazz improvisation and performance.