A whirling vortex of energy and grace, accomplished Bharatanatyam dancer and Mosaic Fellow, Navia Natarajan, has a luminous presence on stage. 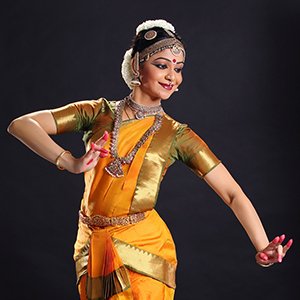 Whether she is performing a complex sequence of adavus or a free-flowing dramatic piece steeped in abhinaya, the lithe and petite Navia embodies impeccable flexibility, rhythm and technique. But beyond the flawlessness of her craft, the US-based dancer’s classical performances, which follow the Vazhavoor style, hypnotise with their depth of emotion and uncanny ability to express abstract ideas.Neither hybrid nor experimental, Navia’s dance is rooted in classicism, and committed to the framework of the Margam (the prescribed path that Bharatanatyam performances follow). But from there on, it takes its cues and inspiration from the present. She stays true to the rigors of classical technique, but injects her dancing with a creativity and vision that is uniquely her own. Approaching her art with a questioning and experimental spirit, she does not dance the Bharatanatyam of fifty years ago. Rather, she thinks about the ancient dance with a modern mind, energising the beauty and elegance of its classical language with the vitality and vibrancy of contemporary thought and innovation.

Beyond the Margam
In her performances, the traditional repertoire of movements – the intricate footwork, the deft flicks of the wrist and the neck, the subtle and dramatic flicker of facial expressions and the rapid spins and elegant turns of the waist – are expressed in their pristine classical glory. But there is also enough room to play with the elements of theatrical performance and conceptual movement. Within the rich tapestry of Bharatanatyam, Navia weaves in sensibilities and themes which are distinctly modern. This includes metaphorical explorations of the world around and the inner self (‘Agni’), reinterpreting ancient mythological characters (‘The Quest Unsaid’), using medieval Sankrit poetry to shine a light on present-day relationships (‘Amarushataka’) and juxtaposing classical literature with abstract English poems.

Mythology as muse
A narrator of ancient tales, the Hindu epics are Navia’s starting point. She scours the annals of Indian mythology and literature for inspiration, ideas and concepts and breathes new life into them. With a penchant for gritty and complex stories, Navia reanimates characters like Shiva and Karna in her pieces and productions, through the prism of her own unique vision. “I take mythological characters and forces, whether it’s the Himalayas or Shiva, and give it my own interpretation. I experience the character, journey with it and see what he or she does to me and depict that, instead of taking up material and saying ‘it is like this’, ” she elaborates.

From performer to artist
With a rare gift for weaving epic stories and human experience in a single, cohesive strand, she makes the seemingly archaic movements of Bharatanatyam come alive for audiences across generations, cultures and geographies. With complete mastery over its classical rigors, she goes beyond its syntax and infuses her performances with emotion and feeling, expressing the many shades of grief, loneliness, joy, love, guilt, longing, anger and despair with sensitivity and nuance. “Dance is a visceral experience…it is not just performed or intellectually considered, but felt. You have to put yourself in the piece and feel it,” Navia explains.

An adept at yoking the old and the new with effortless grace, Navia’s performance go beyond the restrictive definitions of traditional and contemporary, and are sublime experiences where time and space stand still.