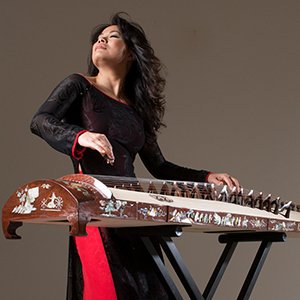 A fearless musical explorer, Mosaic Fellow Vân-Ánh Võ is an award-winning performer of the 16-string đàn tranh (zither) and an Emmy Award-winning composer who has collaborated with Kronos Quartet, Alonzo King LINES Ballet, and Yo-Yo Ma. In addition to her mastery of the đàn tranh, she also uses the monochord (đàn bầu), bamboo xylophone (đàn t’rung), traditional drums (trống) and many other instruments to create music that blends the wonderfully unique sounds of Vietnamese instruments with other genres, and fuses deeply rooted Vietnamese musical traditions with fresh new structures and compositions.

Coming from a family of musicians and beginning to study đàn tranh (16-string zither) from the age of four, Van-Anh graduated with distinction from the Vietnamese Academy of Music, where she later taught. In 1995, Vân-Ánh won the championship title in the Vietnam National Đàn Tranh Competition, along with the first prize for best solo performance of modern folk music. In Hanoi, Vân-Ánh was an ensemble member of Vietnam National Music Theatre as well as a member of the traditional music group Đồng Nội Ensemble, which she founded and directed. She has since performed in more than fourteen countries and recorded many broadcast programs in and outside of Vietnam.

After taking on an integral role in Kronos Quartet’s theatrical production “All Clear” in 2012, Vân-Ánh premiered her first multi-media production as Artistic Director, composer, and performer with “Odyssey” at the Kennedy Center in 2016. Since then, she will be premiering “Songs of Strength” at Cal Performances, UC Berkeley in March 2021, and the first part of Mekong trilogy production, “Mekong: SOUL” commissioned by Kennedy Center in 2021.

Her productions are unique in that they often include a community component leading up to her performances, including community workshops that are meant to further engage participants in the topic that has inspired Vân-Ánh in the creation of these productions. Under President Obama’s administration, Vân-Ánh was the first Vietnamese artist to perform at the White House and received the Artist Laureate Award for her community contributions through the arts. Vân-Ánh has also received project awards and support from Creative Work Fund, Center for Cultural Innovations, Alliance for California Traditional Arts, City of San Jose, New Music USA, Mid Atlantic Foundation, Chamber Music America (for residency work), Zellerbach Family Foundation, California Art Council, San Francisco Commissions, and the Haas Fund.