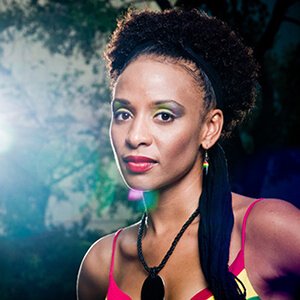 Venus Jones earned her MFA in English and Creative Writing from Mills College in 2014, and she was one of the honored commencement speakers that same year. She’s worked for two television networks including HSN and MTV, and she’s opened for Def Poetry on Broadway.

Venus Jones is a former radio personality, actress, model, poet and the author of nine creative projects including a mobile app for Kwanzaa and the book “She Rose.” She’s been a leader in the Shero movement, a TEDx presenter and a poetry slam finalist at the Austin International Poetry Festival.

Venus’ one-woman show, “Poetic Soldier” earned her “Most Inspiring Solo Performance at the Los Angeles Women’s Theatre Festival.” Her short play “Race and War” was featured at the Tampa Bay Theatre Festival. Most of her work promotes inner peace, diversity, her principles, and the empowerment of marginalized people.