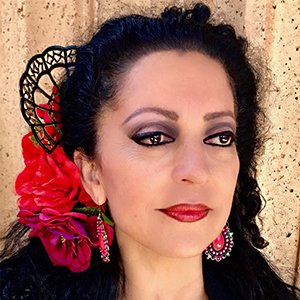 Yaelisa (Artistic Director/ Choreographer of Caminos Flamencos) is internationally recognized as a master teacher, dancer and choreographer. Her immersion in flamenco culture began with her mother, the renowned singer/dancer Isa Mura.

Yaelisa’s unique improvisational knowledge and history lend an authority to her workshops and classes, and many of her students and dancers have gone on to study and perform in Spain and the U.S.  She has performed alongside many of Spain’s greatest flamenco artists, both in Spain and in her work as artistic director and choreographer for her renowned company Caminos Flamencos and as co-founder of the New World Flamenco Festival. Her company has been nominated for 4 Isadora Duncan Dance Awards, and she is the recipient of an Emmy Award for Choreography and an Izzie Award.

Her body of work in both traditional and contemporary flamenco has set a standard nationally and includes movies, video, opera, television and theater. Critics have recognized her abilities by saying,“It might hard to stand out among such luminaries, but not for Yaelisa, who has a finely controlled, hyper-mobile style, like a kind of liquid obsidian. Another jewel in the flamenco crown.”, from the LA Times, and The Village Voice, when she collaborated with a modern dance production, stating that, “Amazing is the powerful presence of flamenco dancer Yaelisa, who also contributed to the choreography, her heelwork providing an inflamed pulse that the others echo.”  She continues to be a driving force in American flamenco along with her husband, guitarist and composer Jason McGuire “El Rubio”.