Femina: Find the Divine in India, Cambodia, and China

Making The Mosaic – A column that dips into the disparate, diverse palette of our communities to paint inclusively on the vast canvas of the Bay Area by utilizing Heritage Arts.

Nine different (sub) cultural histories and traditions from around the world were co-presented by Mosaic Silicon Valley and Guru Shradha, in a program called Femina. It was a call for the world to step out of their cultural silos and experience the vibrancy of the Bay Area, the dynamism of the feminine, and the unifying power of the Arts to build a gender-balanced world.

As the program director, it was fascinating for me to delve into the compositions and choreographies and see the astounding common threads emerge, golden and self-evident. We’ll explore these findings through the first act of the program called Divine | Awaken featuring Indian, Cambodian, and Chinese art forms. Femina’s Divine | Awaken was an ode to the celestial and mythological – It was a call for all of us to find our divine and enlightened selves.

Guru Shradha’s Niharika Mohanty urged us to make room for, submit, and surrender to the divine feminine energies of Durga. Along with her Odissi students, Mohanty beautifully re-incarnated the superb sculptures from Indian temples, the forms manifesting god-like in the blue-light of the stage. One journeyed back in time – and saw the sculptors drawing upon their spiritual energies to carve the goddesses in stone. Art is a journey, one realizes, to an inner destination – familiar or invented, real, unreal, or fantastical. One cannot connect to the outside world without having connected within and art accelerates these connections. 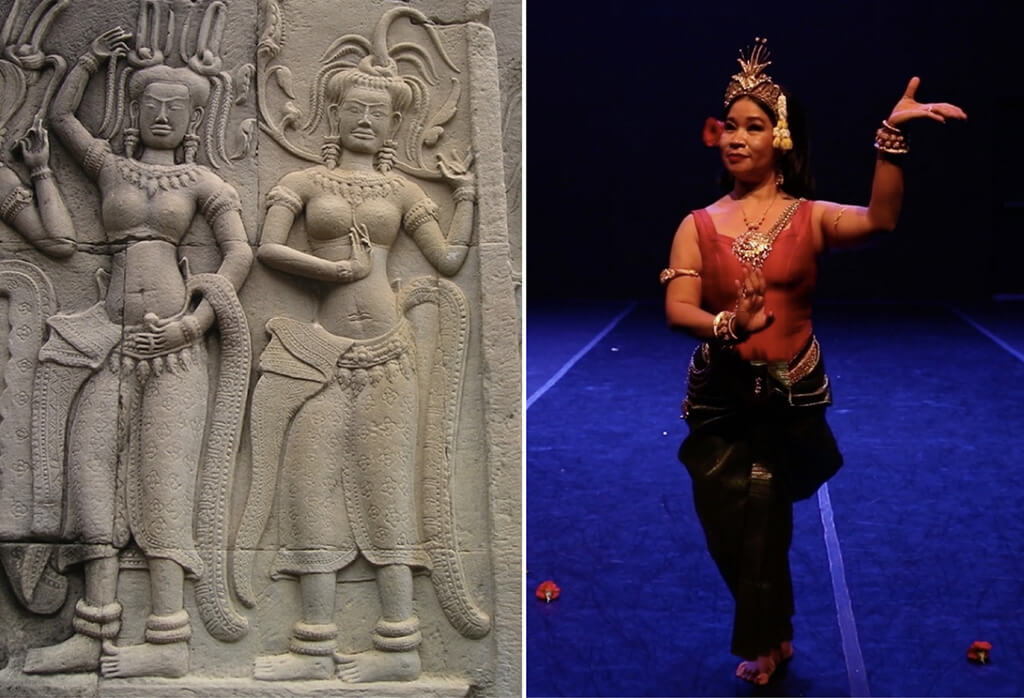 The Goddess was visited again by master choreographer and dancer, Charya Burt in the Cambodian Robam Chun Por or The Wishing Dance. It is typically in an opening ceremony, Devada Srey, that is used to convey blessings to the audience through flower petals. I was fascinated by the obvious Indian influences – Deva in Sanskrit is God, for starters. The Cambodian temple, Angkor Wat, is dedicated to the Hindu God Vishnu; indeed, there exists a version of Ramayana in Cambodia. Contrastingly though, while Indian classical dance uses movement, percussion, and melody to impress the divine upon us on Earth, Cambodian dance is designed to transport us to the heavens; the movements are soft and un-creature-like – Burt seemed to glide, buffeted by centuries of mysticism. 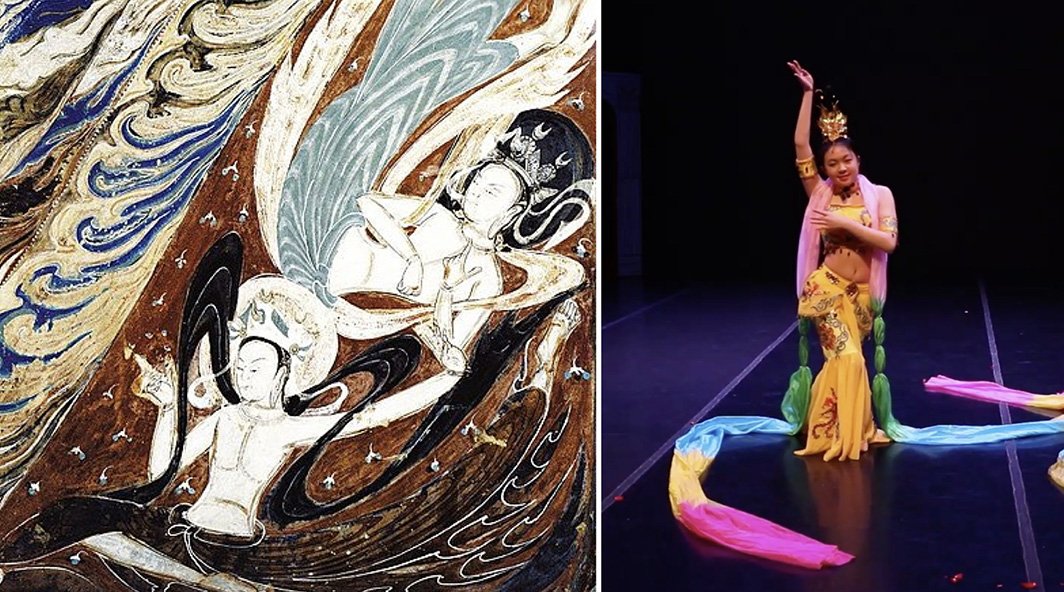 A dancer of the Hai Yan Jackson Compnay recreates art from the Dunhuang Caves.

The Chinese arts reclaimed history, thus solidifying the connection between the Divine and the Human. The Hai Yan Jackson Company presented “Flying Apsaras from Dunhuang.” This dance and its costumes were inspired by the discoveries at Dunhuang Caves which were believed to have been walled up in the 11th century and contain some of the finest examples of Buddhist art. Dunhuang was established as a frontier garrison outpost by the Han Dynasty and became an important gateway to the West, a center of commerce along the Silk Road, as well as a meeting place of various people and religions such as Buddhism. My “Indian” radar picked up on the Silk Route and Buddhism. I could feel the palimpsest of time and geography reveal itself in layers. The age-old apsaras appeared before us and the choreography was faithful to the celestial aura.

In Femina, the Mosaic team was able to create a feminine continuum between realms, time, spaces, cultures, and generations, through beautiful art. Happy Women’s History Month to all of you, dear readers!

The wonderful thing about programming for Mosaic is that it blurs the lines. The narrative may begin as Art imitating Life but then one quickly discovers that it is Life imitating Art. Stories of life – its past, current, and future – are presented on the canvas of culture of, by, for the people in a specific place. Join us and learn more about the Mosaic movement as we catalyze Inclusion and cultivate Belonging in America!

Priya Das is a writer, dancer, and co-founder of Mosaic Silicon Valley. She is fascinated by the intersections between history, culture, convention, traditions, and time.