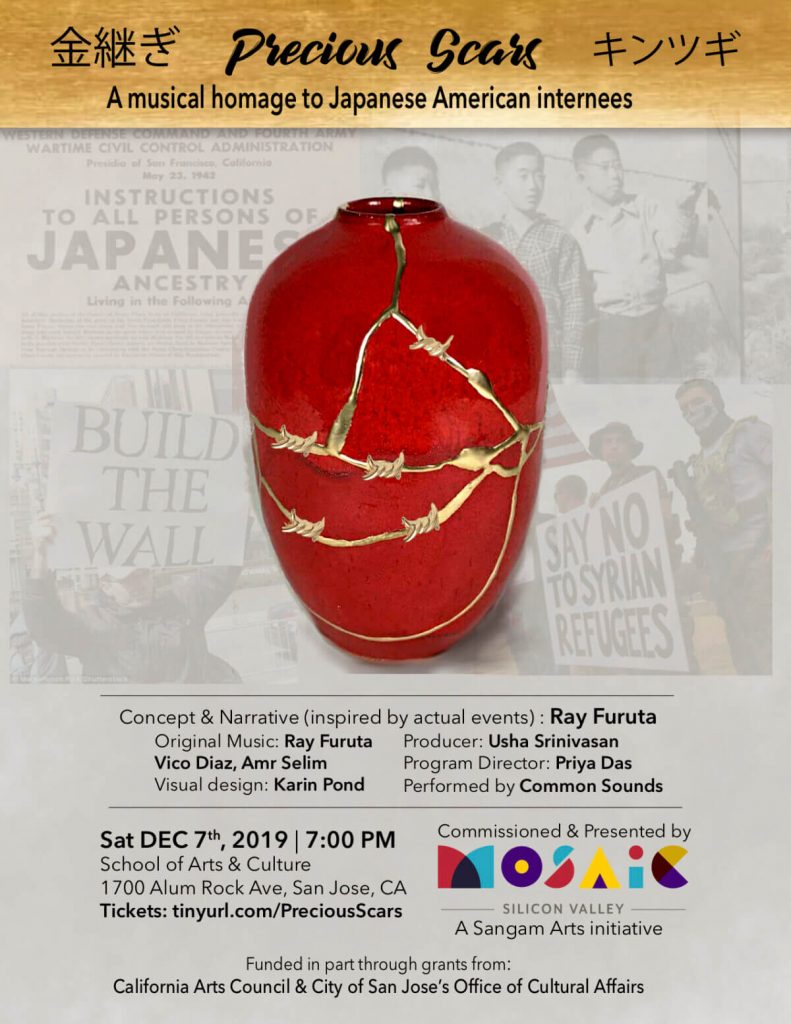 Precious Scars is a musical testament to the courage of immigrants in the United States past and present. The music draws upon the lives of and pays homage to the US- Japanese internees and their families. Ray Furuta, of part-Japanese origin himself, will be joined by Amr Salim and Vico Diaz to remind us of the universal nature of the journey to belong.

“This [Precious Scars] is very powerful. … I just feel like this music and the audio and the visuals capture the sense the starkness of it, and then the ending is a Japanese lullaby. It was just extremely touching. The message for today is stark, but I also feel it was hopeful. I am just so touched by this production.”
– Claire

“It was really emotional in beautiful ways. It was very rich and inspiring… I felt it was exquisite in the way it teaches us about how divisive we can be to each other as human beings and how we are really one…..I thought they expressed such complexity eloquently, with the live music that was amazing – the composition was gorgeous – and seeing the video was so breathtaking all at the same time. It was simple, poignant, and open my heart!””
– Colleen

“I love the cultural collaboration and cultural instrument collaboration. It’s extremely unique when someone brings together cultural collaboration in a music piece.
I’m an educator and it’s heartwarming to see someone else taking ownership – not someone else but it becomes our story. That is what I think is so unique about it. It’s our story and it’s not just being told by us, but being embraced by a wider community taking ownership of the experience.
That is what is going to bring us together. Things like the border, issues about immigration – We all own it – and so we all solve it. It’s not their problem – It is our problem. That will move us in a different direction. A real positive direction.”
– Victoria

“I’ve been involved in doing education about the internment of most of my adult life. What I find interesting is how different people now have a slightly different take on talking about this and presenting it in a different unique way. I really thought the music was really nice.””
– Tom