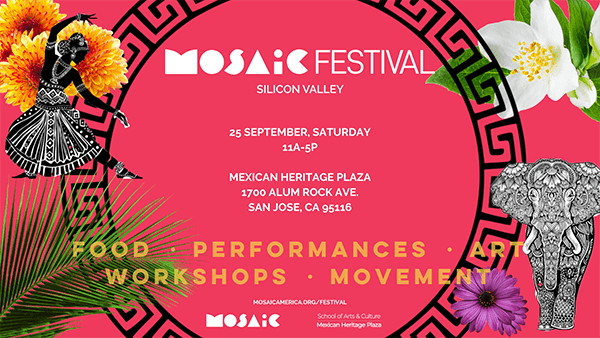 The first of its kind, the Mosaic Festival establishes its legacy to honor the cultures of Silicon Valley and cultivate greater belonging through art.

July 6, 2021 (SAN JOSE, Calif.) Mosaic America announced its first annual Mosaic Festival – Silicon Valley, an event aimed at representing and connecting the diverse people of Silicon Valley through performance, movement, visual art, crafts and food. The festival is presented in partnership with the School of Arts and Culture and will take place at the Mexican Heritage Plaza in East San Jose on September 25, 2021.

“We are thrilled to offer the Mosaic Festival, especially after more than a year of distance. Our goal is to authentically represent East San Jose and Silicon Valley as a vertex of diversity and innovation through cultural expressions that foster meaningful and tangible harmony and belonging for all resident communities,” said Usha Srinivasan, President & Co-Founder of Mosaic America.

Along with performing and visual arts by local Bay Area artists, the Mosaic Festival will feature a Healing Garden space which will feature interactive healing movement practices from cultures that have made a home in the region, arts & crafts, art installations, and regional food trucks to represent the communities and makers of Silicon Valley.

“Culture is born when human experience finds expression; from that expression comes art. Sadly and too often, culture is seen as a reason to “other.” The Mosaic Festival will present culture as a way to connect, to catalyze inclusion, to cultivate belonging,” shares Priya Das, the nonprofit’s Co-Founder and Vice President of Programming. “Humans have used art to express sentiment, pass down stories, and heal their communities. The Mosaic Festival will showcase these common threads that run through all of us.”

As one of the first community gatherings since the COVID-19 pandemic with an expected attendance of upwards of 1,000 people, Mosaic America will be working closely with the City of San Jose, Santa Clara County and the Mexican Heritage Plaza to plan a safe, outdoor gathering.

Jessica Paz-Cedillos, the Executive Director for the School of Arts and Culture (SOAC) at the Mexican Heritage Plaza said about the festival, “Our team believes that celebrating the diverse cultures in San Jose is central to establishing community connections and solidarity and we couldn’t be more excited to support the Mosaic Festival and its commitment to diversity and inclusion.” 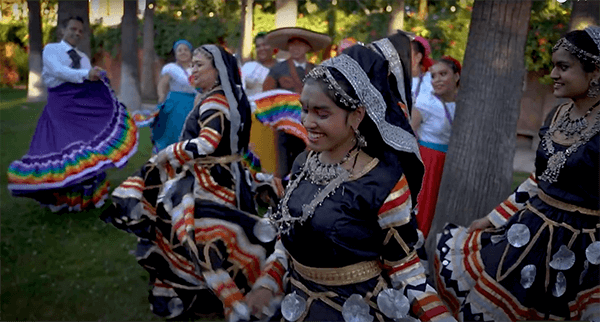 Yesterday, Mosaic America released this powerful video on the Mosaic Festival, signaling the community’s hope for an American Mosaic, where uniqueness is honored in a community that works towards belonging. Click image to view video.

The Mosaic Festival programming is funded through a multi-year grant from the Knight Foundation.  Other early funders include Applied Materials Foundation, SVCreates and Adobe.

To learn more about how to participate and for details about the festival, visit www.MosaicAmerica.org/Festival.

In May, Mosaic America (formerly known as Sangam Arts) was awarded $25,000 from the National Endowment of the Arts (NEA) in the ‘Presenting & Multidisciplinary Works’ category in support of next year’s Mosaic Festival in 2022 and its mission of cultivating a sense of belonging through co-created art and dance. This funding was part of the NEA’s second round of over $88 million in grants to organizations across the country in FY 2021.

Mosaic is a nonprofit organization that strengthens communities, cultivates belonging, and catalyzes inclusion through inter-cultural and co-created art. Our team of artists uses inspiration from their cultures and art forms to collaborate on unique performances and expressions that highlight the common threads of our shared American story.