View of An American Mosaic

Mosaic Festival season is in full swing as the inaugural event is just around the corner. On the journey to create a sense of belonging, healing and harmony for all, we are presenting works from all creative fronts. From dancers and musicians to photographers and painters, we are offering a multi-faceted view of American communities. In addition to having live performers and vendors at the Mosaic Festival on October 2nd, the visual art exhibit, ‘An American Mosaic’ is available to the public through October 3rd.  Launched on September 10th with performances from Anouk Yeh, Ray Furuta and My-Linh Le, the exhibit also offers some works available for purchase.

Meet a few of our featured artists. 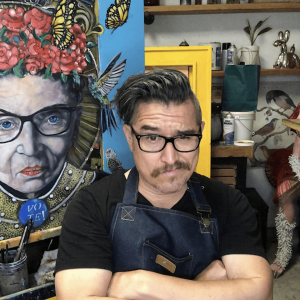 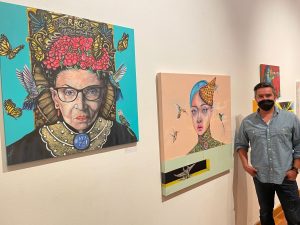 Tulio Flores is an all-around talented Mexican artist. He works with a variety of materials to create paints, sculptures, murals, book illustrations, and much more. His contemporary modern art is influenced by his culture and has reached galleries, shows, magazines, newspapers, and solo exhibitions, all accomplished on his own without any formal art schooling, relying solely on his talent and inspiration.

Both of the artworks Tulio is pictured in the gallery were lent to this exhibit by their permanent owners. He shared that he actually began the artistic portrait of the late Ruth Bader Ginsberg before her passing in 2020 and was even more inspired after receiving the news.

Follow him on Instagram @artbytulio for a peek into Tulio’s life and to keep up with his art. 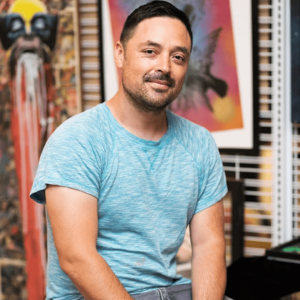 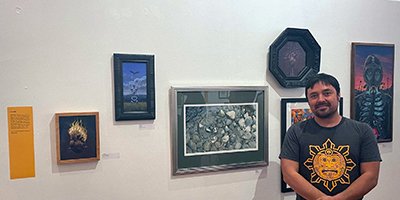 Francisco Ramirez (“Fco1980”) was born in Mexico City, Mexico, but his art developed in San Jose, California, where he currently lives. As a self-taught artist he has worked with watercolor, oils paints, sculpting, photography, murals and other mixed media but his choice of medium is acrylic.

Francisco brings an interesting variety to the pieces he contributes to ‘An American Mosaic’. From pandemic terror to relaxing river stones, Francisco’s artist a reflection of his lived experiences. 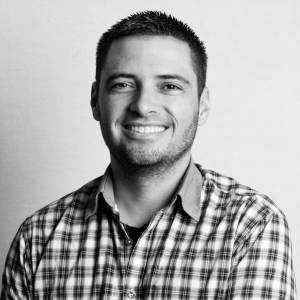 Dan Fenstermacher merges documentary storytelling, and street photography with both humor and activism. Fenstermacher was recently selected as the winner of the 2020 Miami Street Photography Festival International Series Contest and the 15th Annual Smithsonian Photo Contest for the American Experience category.

Bringing a welcomed variety to the exhibit is Dan Ferntermacher as one of the only photographers being featured at ‘An American Mosaic’. Art is all around us, as Ferntermacher so beautifully captures in his work. 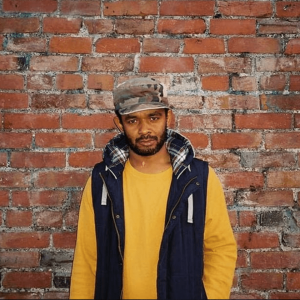 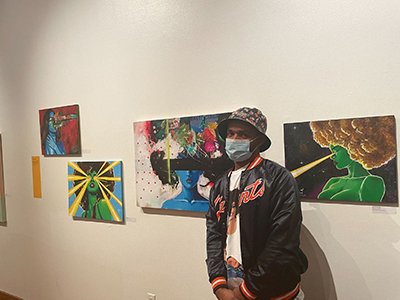 Richard Hoffman’s work examines the collective unconscious mind and the ways in which all people can be connected through art. Painting on canvas, Hoffman portrays beauty with a flare of fantasy with green women and abstract anonymous features.

With four sizable pieces in the show, Hoffman is a pop of vibrance and intensity as you enter the room. 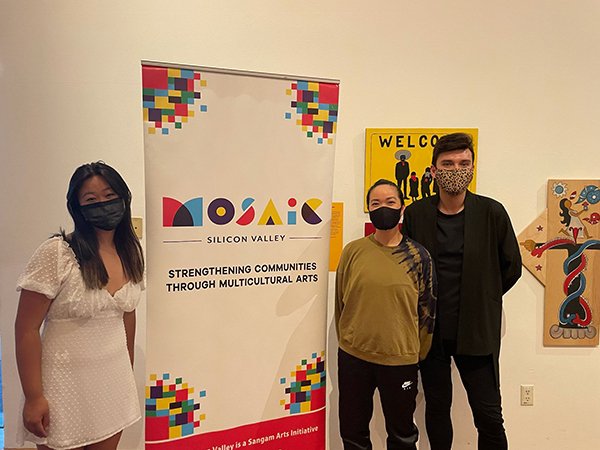 Along with the fantastic visual art exhibit at the launch of ‘An American Mosaic’, guests were graced with live performances from Anouk Yeh, Ray Furuta and My-Linh Le.

My-Linh Le is a graduate of UC Davis School of Law who took a leap of faith and followed her passion for dance into a career. Recognized by KQED’s Women to Watch and Forbes 30 under 30 list, Le has been in the spotlight letting her dreams come true. She opened the event with a freestyle dance performance. Follow her on instagram @mylinhie to see more of her work!

Anouk Yeh is a Senior at Saratoga highschool and an award winning spoken word poet. She shared a set of three poems, the last of which left the audience with goosebumps. In this poem Yeh recounts the experiences of a group of teenage girls at her school have been on a crusade fighting for survivor rights on campus as their districts addresses instances of sexual assault and the Me Too movement in their community. Yeh will be off to college soon, and who knows what she has in store for us next, follow her on instagram @uh.nouk to keep up with her!

Ray Furuta and My-Linh Le wrapped up the live performance portion of the evening with a duet of flute and dance. Furuta, a Mexican-Japanese American flutist, has performed worldwide as a commanding and versatile performing artist within the classical, contemporary, world, jazz, and pop sectors. He has been dubbed a “Rockstar on the Flute” and his performance certainly lived up to his legacy. Follow Furuta on Instagram @rayfuruta and be sure to check out his IG TV!